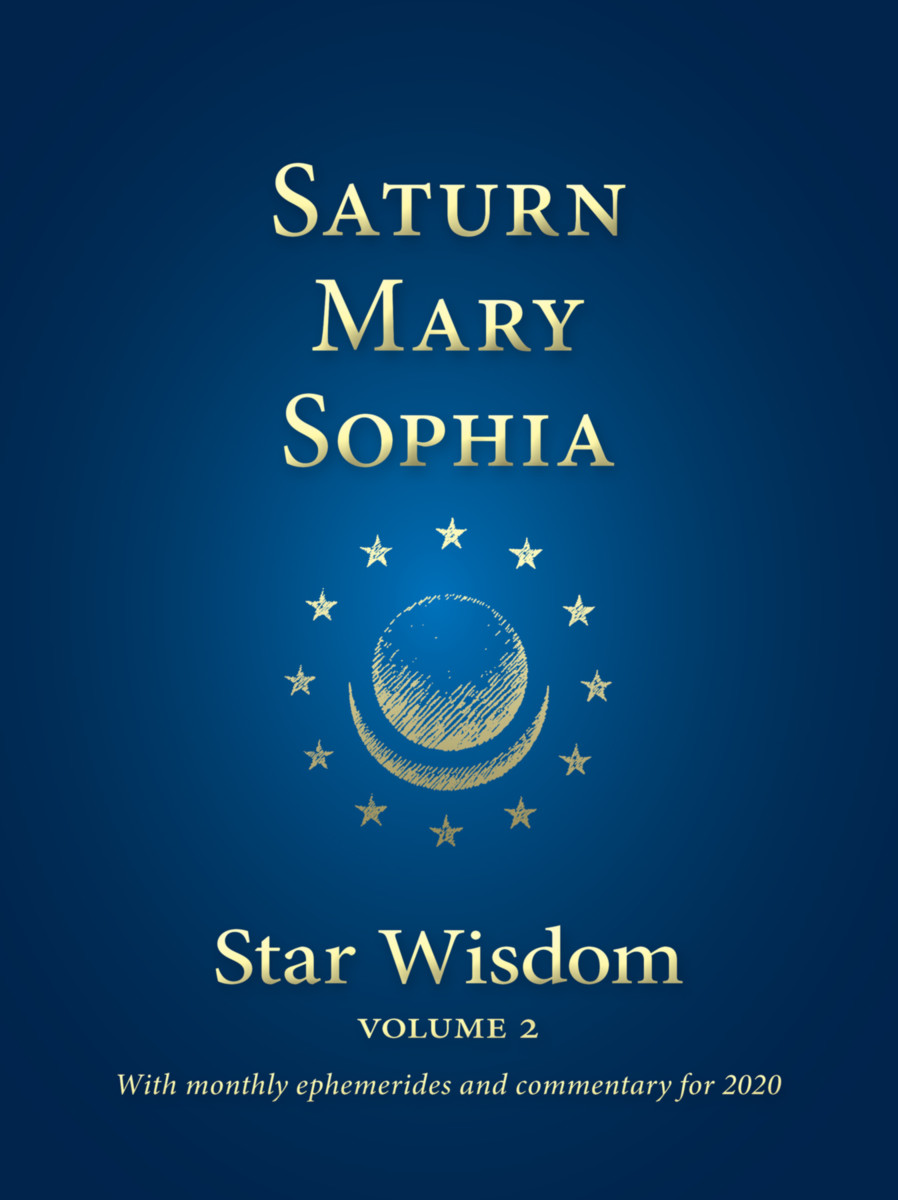 Star Wisdom, vol 2: With Monthly Ephemerides and Commentary for 2020

Saturn–Mary–Sophia includes articles of interest on star wisdom (Astrosophy), as well as a guide to the correspondences between stellar configurations during the life of Christ and those of today. This guide comprises a complete sidereal ephemeris and aspectarian, geocentric and heliocentric, for each day throughout the year. Published yearly, new volumes are generally available beginning in November for the coming new year.

According to Rudolf Steiner, every step taken by Christ during his ministry between the Baptism in the Jordan and the Resurrection was in harmony with—and an expression of—the cosmos. The Star Wisdom series is concerned with these heavenly correspondences during the life of Christ and is intended to help provide a foundation for cosmic Christianity, the cosmic dimension of Christianity. It is this dimension that, by and large, has been missing until now from Christianity and its the 2,000-year history.

Readers can begin on this path by contemplating the movements of the Sun, Moon, and planets against the background of the sidereal zodiacal constellations (signs) today in relation to corresponding stellar events during the life of Christ. In this way, the possibility is opened for attuning in a living way to the life of Christ, who is now—since the onset of his Second Coming in 1933—spiritually present in the etheric aura of the Earth.

Volume 2 of Star Wisdom highlights the 100th-year anniversary of Steiner’s lecture series on Isis, Mary, and Sophia in December 1920. In these lectures, Steiner laid out a path for new forms of both star wisdom and nature wisdom, which laid the foundation for his Astronomy Course a month later. According to the author of Meditations on the Tarot, the guiding being of the Saturn Sphere is none other than the Virgin Mary, who has manifested in history as both Isis and Sophia. The year 2020 is very special for the planet Saturn.

Finally, the monthly commentaries for the year are provided by Joel Matthew Park, supported by Julie Humphrey’s astronomical previews for each month. They offer us an opportunity to connect the spiritual with stellar configurations during 2020. This direct interaction of human beings on Earth with angels—as well as other heavenly beings connected with the stars—is intended to help the reader develop the capacity to receive the wisdom-filled teachings of the angelic hierarchies.

“Blessings of the Great Conjunction” by Julie Humphreys

“The Mystery of Emerging Form: Capricorn and Sagittarius” by Yvan Rioux

“Into the Vortex,” Part 2 by Kevin Dann

“Saturn in Cancer: Returning to the Origin of the Houses” by Joel Matthew Park

“The Galactic Horoscope and the Circle of the Galactic Constellations” by David Bowden and Robert Powell, PhD

“The Saturn–Pluto Conjunction of 2020” by Lucian Schloss

“Cultivating Light: A Michaelic Approach to Living in the Shadow of the Beast” by Claudia McLaren Lainson

“Working with the Star Wisdom Calender” by Robert Powell

Commentaries and Ephemerides, January to December 2020 by Joel Matthew Park

Glossary
Bibliography and Related Reading
About the Contributors

CLAUDIA McLAREN LAINSON is a teacher and Therapeutic Educator. She has been working in the field of Anthroposophy since 1982, when she founded her first Waldorf program in Boulder, Colorado. She lectures nationallyis the founder of Windrose Farm and Academy near Boulder. Claudia most recently founded the School for the Sophia Mysteries at Windrose. She is the author of The Circle of Twelve and the Legacy of Valentin Tomberg.

PHILLIP MALONE practices Structural Integration in Peter-borough, New Hampshire. He has been a student of Christian Hermeticism since 2001, with Rudolf Steiner and Valentin Tomberg being his primary influences. Currently he is engaged in a long-term meditative study of the Tarot de Marseille. He also enjoys singing in choirs, prayer eurythmy, basketball, and exploring cosmology.

LUCIAN SCHLOSS is a psychotherapist, astrologer and family constellation facilitator living in Oregon’s Willamette Valley with his wife and three kids. He is a Waldorf graduate and has been studying Anthroposophy for the past 18 years.

BECCA S. TARNAS, PhD, is a scholar, artist, and editor of Archai: The Journal of Archetypal Cosmology. She received her doctorate in Philosophy and Religion from the California Institute of Integral Studies with her dissertation, The Back of Beyond: The Red Books of C.G. Jung and J.R.R. Tolkien. Becca received her BA from Mount Holyoke College in Environmental Studies and Theater Arts, and an MA in Philosophy, Cosmology, and Con-sciousness at CIIS. Becca has a private astrological counseling practice.

The Mystery of Sophia
Bearer of the New Culture: The Rose of the World