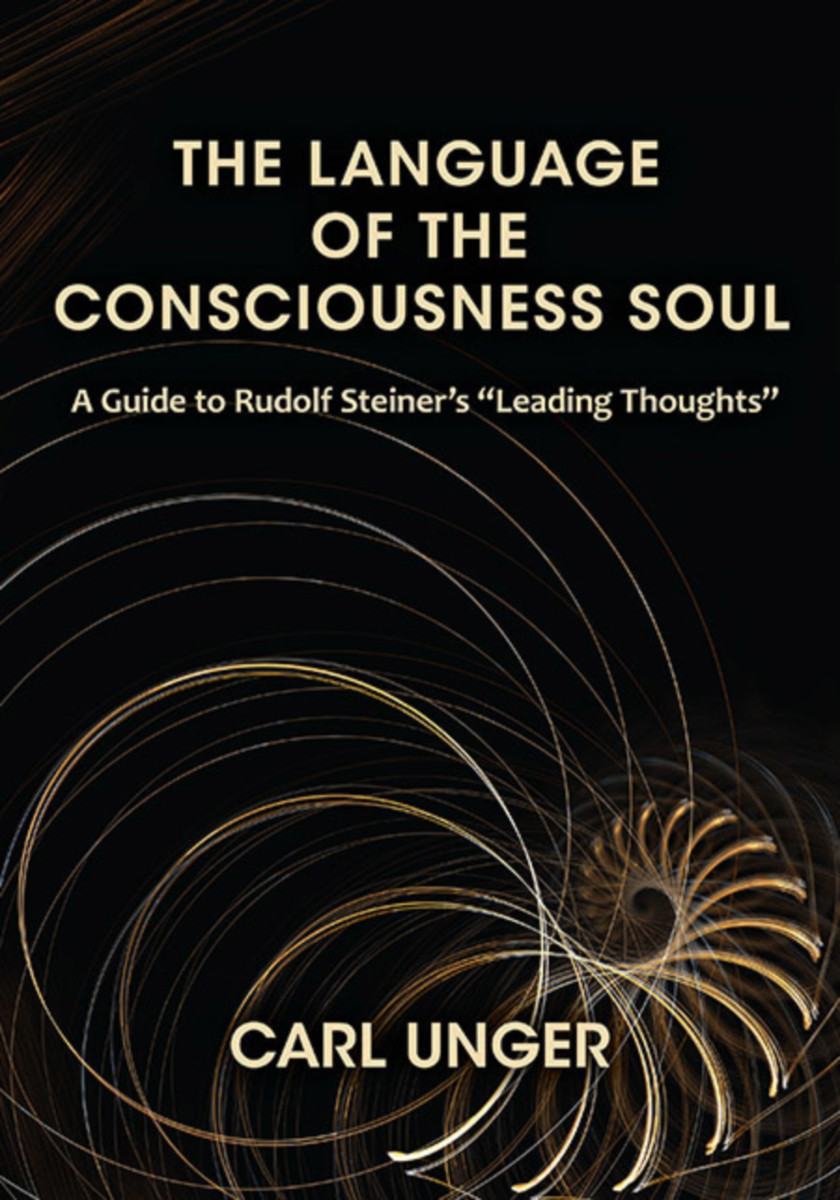 The Language of the Consciousness Soul

“After Rudolf Steiner had left us in the body, the gifts of the spirit that were offered by him in such overflowing measure could not continue. It must now happen that a community of human beings takes over the results of his spiritual research, takes them in such a way that they remain alive in the community. People must come together in anthroposophic work, united in such a way that Anthroposophy comes into its own” (Carl Unger, Oct. 29, 1928).

This volume provides perhaps the most comprehensive and profound exegesis of Rudolf Steiner’s Anthroposophy, especially his book titled Anthroposophical Leading Thoughts. That book provides Steiner’s final and most complete explanation of his Spiritual Science through brief, aphoristic thoughts, or meditations, on the profound esoteric meaning of the modern spiritual path he called Anthroposophy.

In The Language of the Consciousness Soul, Carl Unger unfolds and expands Rudolf Steiner’s “leading thoughts” in 78 brief, meditative chapters to help the reader comprehend the deeper meaning behind the Leading Thoughts. Unger helps us see how Steiner created a mandala-like “image” of Anthroposophy, revealing an ever-expanding cosmology and epistemology that goes far beyond mere philosophy or a belief system to a practical path of spiritual investigation and knowledge for modern humankind.

Rudolf Steiner had this to say about Carl Unger:

“Dr. Carl Unger, for many years past, has always been the most industrious and devoted collaborator in the anthroposophic movement.... At an early date, Dr. Unger saw that Anthroposophy, before all, needs a strong foundation of the theory of knowledge. With a deep understanding he took up what I myself, many years ago, was able to give in my books Goethe's Theory of Knowledge, Truth and Knowledge, and Intuitive Thinking as a Spiritual Path: A Philosophy of Freedom, he developed independently what I had intimated. Supported by mental discernment, his goal was to see through the nature of the human process of knowledge in a clear analysis, and from that to form its true picture. Dr. Unger is not dialectical but an observer of empirical facts. This is why, through the years, he has been able to give results of the highest value, showing how the process of knowledge in ordinary consciousness produces, always and everywhere, out of itself, the impulses to anthroposophic investigation. Moreover, Dr. Unger's method of thinking, trained through technical problems, is free from subjective vagueness, and thus his scientific collaboration in Anthroposophy is the most important that we can have.”

The Language of the Consciousness Soul is an indispensable guidebook for group study and for individuals who wish to penetrate the depths of Anthroposophy and apply its principles both inwardly and to daily life.

About the Consciousness Soul
About the Author

1. Introduction
2. The Consciousness Soul
3. Fundamental Principles
4. The Path to the Limits of Knowledge
5. Cosmic View
6. Crossing the Threshold
7. The Image and Reality of the Human “I”
8. The “I” and Meditation
9. The “I,” Nothingness, and Light
10. Body, Soul, and Spirit
11. The Spirit’s Call to Awake
12. Concerning Freedom
13. Freedom and Death
14. Death, Morality, and Time
15. Exercise in Thought
16. Threefold Organization and Morality
17. Transformations
18. The Art of Thinking
19. Spiritual-Scientific Copernicanism
20. Entering the Inner Being of Nature
21. Concerning Morality
22. Concerning the Will
23. Preliminary Karma Exercises
24. The Human Being and Destiny
25. Karma Exercises
26. Karma and History
27. History, Morality, and Prevision
28. A New Service of Sacrifice
29. Analysis of Consciousness
30. Sounds and the Word
31. A New Beginning
32. “Epistemologies” of the Higher Hierarchies
33. Cosmic Realms of the Hierarchies
34. Thinking, Meditating, Seeing
35. Under Michael’s Banner
36. What is Concealed and Revealed in Waking, Dreaming, and Sleeping?
37. What Does the Will Conceal and Reveal?
38. Moral Fantasy
39. Religion, Art, and Science
40. The Crisis of the Modern Soul and How It May Be Healed
41. The Sin against the Spirit
42. Spiritual History
43. The Free and the Fettered Thought: Not only an Interlude
44. A New Form of Myth
45. The Enigma of Human Individuality
46. The Victory over Averroes in Our Time
47. Wrestling with the Angel
48. Macrocosm and Microcosm
49. How Is Thinking Made Christian?
50. Concerning Miracle
51. Grace
52. The Michaelic Nature of Rudolf Steiner’s Philosophy of Freedom
53. How Can Life Be Filled with Christ?
54. The Question of World and Human Being
55. The Other Side of Human Freedom, Part One
56. The Other Side of Human Freedom, Part Two
57. The Human Experience of Spiritual Beings, Part One
58. The Human Experience of Spiritual Beings, Part Two
59. The Nature of History
60. The Law of Repetition
61. History and Initiation
62. Historical Decisions
63. Proofs of the Existence of God
64. The Other Side of the Consciousness Soul
65. The Mission of the Consciousness Soul
66. Survey, Part 1
67. Survey, Part 2
68. The Light of the Spirit Self
69. Cosmic Individuation
70. The Cosmic Turning Point
71. Civilizations as Polar Opposites
72. The Nature of Memory, Part 1
73. The Nature of Memory, Part 2
74. The Threefold Earth
75. The Nature of the Astral
76. What the Future Holds
77. Cross and Grave
78. Conclusion...or New Beginning?

Founding a Science of the Spirit
(CW 95)