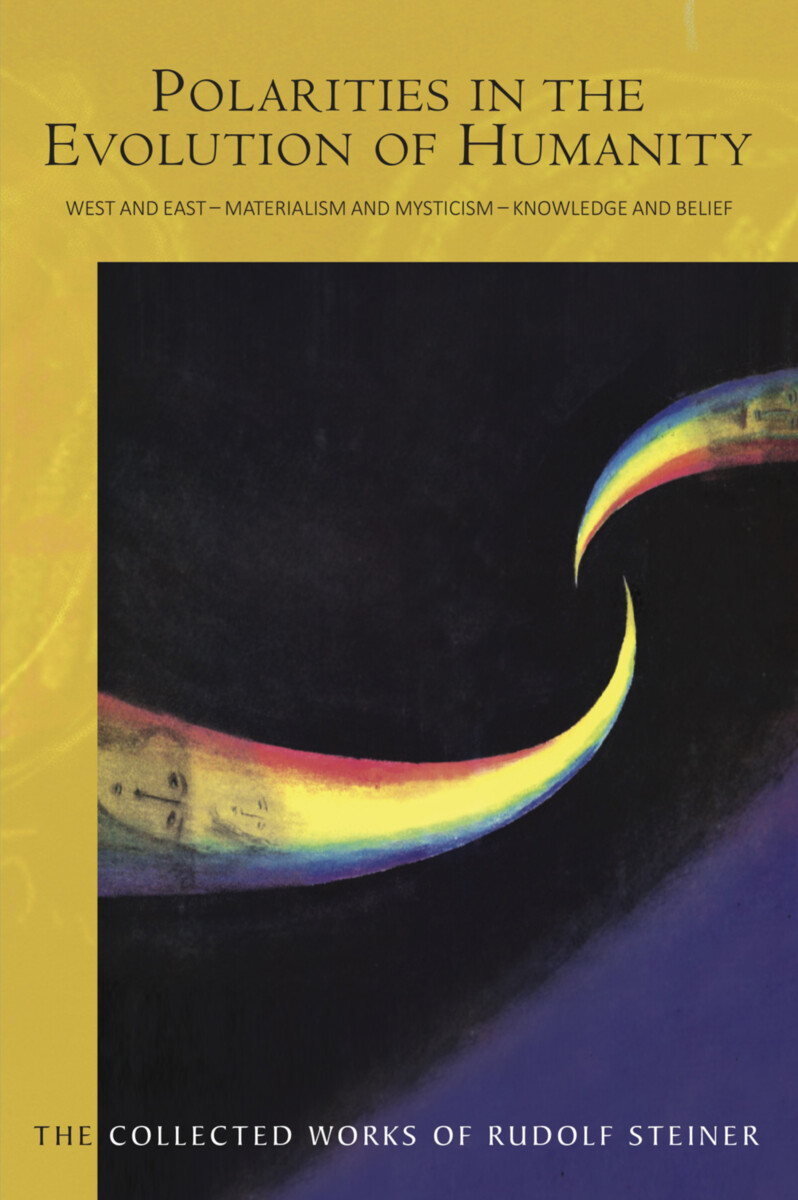 Polarities in the Evolution of Humanity

West and East – Materialism and Mysticism – Knowledge and Belief (CW 197)

“The present age needs to understand that human beings must hold the balance between the two extremes, between the ahrimanic and the luciferic poles. People always tend to go in one direction.... Christ stands in the middle, holding the balance.” — Rudolf Steiner

These eleven lectures were given in postwar Stuttgart against a backdrop of struggle and uncertainty—not only within society at large but also within the anthroposophical movement. Rudolf Steiner and his supporters were working to introduce “threefold” social ideas and—given Steiner’s public profile—were coming under increasing personal and sometimes physical attack.

Steiner responds to this turbulent situation by revealing the spiritual background to the forces of decline working in contemporary civilization. He speaks of retrogressive powers—spiritual beings referred to as luciferic or ahrimanic—that work directly into human culture, manifesting, for example, in what he refers to as the “initiation streams” of Western secret societies, the Church-allied impulse of Jesuitism, and the Bolshevik force of Lenin­ism. The spiritual agents of adversity also encourage polarized thinking and false opposites such as East verses West, materialism, and mysticism, or knowledge and belief. Only the threefold principle, represented by Christ, allows us to create a balance in the midst of these existential conflicts.

This freshly reworked translation is complemented with notes, an index and an introduction by Matthew Barton.

Lecture 2, March 07, 1920: Different possibilities for Asians and Europeans. Need to understand Christ in a new way. Development of the intellect from beginning of post-Atlantean period. Intelligence developed in soul and spirit in the East and at the physical level in Europe. East accepted Christianity into the soul in a way incomprehensible to modern European science. The rational Western mind was bound to the physical body and could not understand the Mystery of Golgotha. Goetheanism. The theosophy of the Theosophical Society as pre-Christian wisdom. Initiation the precondition for social thinking.

Lecture 5, June 24, 1920: Decline of human civilization as a consequence of materialism. Material world can be truly understood only in the spirit. Materialistic view of the human heart as a pump. Head as the fruit of previous life on earth. Materialistic view of history. Economic life as head organ of the social organism, the sphere of rights as its rhythmic organ, and cultural life as its metabolic organ. Threefold social order, Waldorf school, Kommender Tag (Coming day). The destructive quality of untruthfulness. Spiritual science and everyday life.

Lecture 7, July 30, 1920: Materialism and mysticism on the wrong path. Active perceptiveness in Anthroposophy. Looking for nature of matter in the phenomena of the outer world leads to a weak mind; looking for the spirit by practicing inner mysticism leads to immaturity. Politics an illusion—the conservative element is ahrimanic, the liberal element is luciferic. The Jesuits’ battle against Anthroposophy. Rightness of materialism in its own sphere.

Lecture 9, Nov. 08, 1920: East, center, and West. The threefold social order. Sleeping and waking. The threefold nature of human beings. In the East, life before birth was experienced in the spirit; this spirit has decayed. In the center, a culture of material world and spirit—eminence given to thinking (Hegel). West: material culture, but also preparation for future Imaginations; incipient awareness of principles that go beyond death. In the East, instinctive wisdom; in the center, dialectics and intellectual life; in the West, materialism and the spirit of economics. East—end (Tolstoy for example); West—beginning (Keely for example). Mission of the center for today.

Lecture 10, Nov. 14, 1920: Transition from the luciferic age to the ahrimanic age and the coming Christ event. Technology—humans and machines. Ahrimanic demons active in the present; luciferic elemental spirits in the past. Appearance of the etheric Christ today. The world becoming ahrimanic. Stress increasing in human souls. Need to prepare for the Christ event.

Lecture 11, Nov. 22, 1920: The impersonal attitude of modern science. The Christ spirit that has to enter into science. The threefold social order as 20th-century Goetheanism. Spirit self, life spirit, and spirit man (spirit body) cannot evolve through forces provided by the earth, but only through Christ. Schiller's letters on aesthetic education and Goethe's fairytale. The mystery play, The Portal of Initiation, as a metamorphosis of the creative potential in Goethe's fairytale. Golden, Silver and Brazen Kings representing the three aspects of the social organism.

Atlantis
The Fate of a Lost Land and Its Secret Knowledge

Cosmosophy
Cosmic Influences on the Human Being (CW 207)