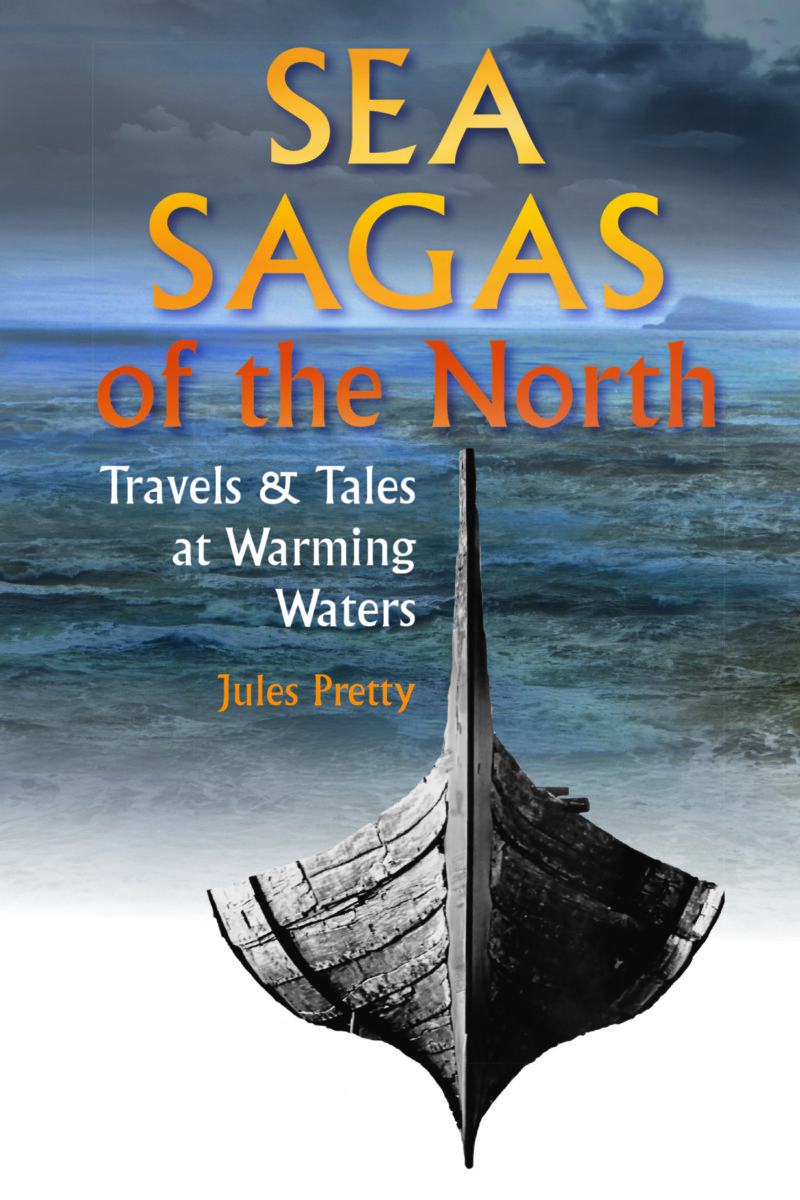 Sea Sagas of the North

Travels and Tales at Warming Waters

There are shadows on the warming, northern seas. Long ago, refugees fled Doggerland when seas encroached. Now rising seas threaten the low-lying shores once again.

Sea Sagas of the North interweaves prose chapters and alliterative sagas. Each chapter tells of travels across shores, seas and islands. These are heroic crossings in warming waters. Each saga tells of tales and times from across the ages. Icelanders ask, “How do we say goodbye to a glacier?” This is the territory of sagas, the Norse and Anglo-Saxon gods of old, and the mythic era of Viking expansion by clinkered longships. It was when dragons protected people from themselves by hiding gold and silver hoards.

These crossing tales and sagas begin at elemental wilds of north-west Iceland. They take in the Lofoten Isles of Norway, Sjæland and the Øresund in Denmark, cross the sea to the eastern shore of England, and travel to the north lands of deepwater ports, inland abbeys and the holy shore of Lindisfarne, and then to the Atlantic isles of Shetland and St Kilda, and wind-torn fragments of the Faroes, completing the circle back at Iceland’s fire and ice.

The book reaches its conclusion with the saga of the Drowning of Doggerland and how the once-dry steppe was flooded by the warming seas, making the people of the plains refugees. The book finishes as Ragnarök looms. What can be done to avoid more fire and flame? These are times when new stories will be needed.

Heroes are a central feature of the Sagas; heroes face enemies and evil, the fierce sea and storm, the changing climate, cruel kings concerned with only their own survival, invaders seeking only money, planners plotting destruction of the fishing villages, ship and fleet owners exploiting labor and preventing safety investments, and  financiers lending on the paper fish.

The heroes stride: women and men confront indifference and evil. We hear of people who consider themselves to be heroes—Vortigern the King; Æthelred the Ill-advised; Olaf the Norse King; Kör the Wicked; Hrolleif the Horrible and his son Slídr; Wulfstan the Archbishop; and numerous ship owners.

So, we hear of shaman Sky-Ryder at the flooding Doggerland; Queen Erce of the coast; Hildr the Drover and abbess of Whitby monastery; and Herne the Hunter King. In sagas of sail, we hear of Skaði, the girl with magic and healing powers; Grim the longship leader; Sigi the slave singer; Ingimund the generous; and Byrthnoð the bold Earl. In the Sagas of fish, we hear tell of Ólíni the nurse; Alf the apprentice boy and later Mate; fisher Ned and cobbler Waxy Jack; Magnus the goði farmer; the slave boy An; and Freddie the deckie learner. There is also Unni the island girl and rescuer; Skipper Jack the last bargeman; Þordur the Life-Saver; and Gibbie the whaler. We hear, too, of Lily and Rita and other women activists of Hull, as well as Mary the first female mayor.

Also included are a glossary of Norse Gods, a timeline, brief notes on walks connected with each chapter, stories, chapter notes, and a bibliography. The book is illustrated with monochrome images by the author, and maps by Chris Pretty to depict the territories of tales and stories, as well as a map of the whole region and regional maps for each chapter.

‘These sagas that are both epic and timeless, and a lyrical evocation of the communities whose lives and livelihoods are bound up with the sea. These are stories of people who have understood our dependence on the riches of the natural world. Stirring and salutary, a beautiful and moving read.’

‘Beautifully crafted and with an imagination [that] speaks to the environmental challenges of today.’

‘Rare and audacious, genuinely brave. The natural and the human are presented as inextricably linked, each creating the other over long stretches of time. A book of sounds and rhythms that points to a new genre, a wonderful achievement and a joy to read.’

‘Masterly – evocative in substance and eloquent in style. I was transported back to my youth and moments of near terror as gales lashed the shorelines of my beloved home in Cornwall. Full of wonderful narratives.’

‘These sagas bring the drama, emotions and practices of the sea-faring world into contemporary relevance without losing the power of past story-telling and lived experiences. Marvellous story-telling and use of language, all sorts of new colours and emotional depths.’

‘Vivid accounts of the interactions of human culture and nature covering the sweep of history in the North Atlantic. The sagas illustrate both the limits and the possibilities of human actions, given the forces of climate change.’

‘Enjoyable rhythms and evocative images, an inspiring [and] creative project.’

‘Sea Sagas has arrived on a stage rich in writing of nature and a changing world, but brings its own unique tilt. Jules Pretty has brought us old stories reimagined under the spotlight of contemporary environmental, social and political changes through his complex and lilting narratives of contemporary Sagas for our modern age. They challenge us to make connections and open the spatial and temporal scope of our understandings of past, present and future.’

‘Extraordinary long-form prose-poems, a reminder of Benjamin Britten’s operas… There is real rhythm and sound and bite.’

‘I love this work. Stunning lay out, an exceptional text. Don’t change a thing. I love the illustrations too. Collectively it is very evocative, such a deep sense of place, myth, time and history running throughout.’

‘A wonderfully imagined and written work, filled with vivid stories and characters and with much relevance to all that is happening today.’

‘Mesmeric writing, [and] spellbinding magic of the descriptions, the flow of time and sea and the magic of the naming of people and things. An intensely rich cultural treat.’

‘I am blown away by the seriousness and achievement; the illustrations are lyrical and minimalist.’

‘Engaging all the essence of the epic: high, ennobling, central theme, extensive physical environment, and some kind of journey. A fine and imaginative piece of work, [with] a flow and continuity like the Sea itself.’

David Butcher, author of The Driftermen, The Trawlermen, Living from the Sea, Following the Fishing and The Ocean’s Gift

‘Wonderfully well researched and beautifully written, an antidote to the frustrations of lockdown.’

‘Intense, ambitious, flowing rhythms and language, evocative of my times spent afloat around the Thames Estuary, and life remembered here on the Colne and Blackwater in memory and myth.’

‘Very interesting to read, reflecting the character of our rich maritime history.’

Preface
Glossary: The Pantheon of Gods and Places
Timeline of Key Events in the Sea Sagas
On Spelling and Pronunciation
On Time, Distance, Weights, and Measures

CHAPTER ONE: THE WESTFJORDS OF ICELAND
Saga I: Crossings
Saga II: Settlement

Jules Pretty, OBE is Professor of Environment and Society and Director of the Centre for Public and Policy Engagement, University of Essex. He is a nature writer, scientist and storyteller. His books include The East Country (2017), The Edge of Extinction (2014), This Luminous Coast (2011, 2014), The Earth Only Endures (2007), Agri-Culture (2002) and Regenerating Agriculture (1995).

Host of the Louder Than Words podcast; presenter of the 1999 BBC Radio 4 series Ploughing Eden; contributor to the 2001 BBC TV The Magic Bean, he is Chief & Founding Editor of the International Journal of Agricultural Sustainability. He received an OBE in 2006 for services to sustainable agriculture and the British Science Association Presidential Medal (Agriculture and Food) in 2015. He is a trustee for WWF-UK and was appointed President of Essex Wildlife Trust in 2019. This Luminous Coast was winner of New Angle Prize for Literature in 2013, and The East Country was winner of the East Anglian book of the year in 2018.

The Norse Stories and Their Significance