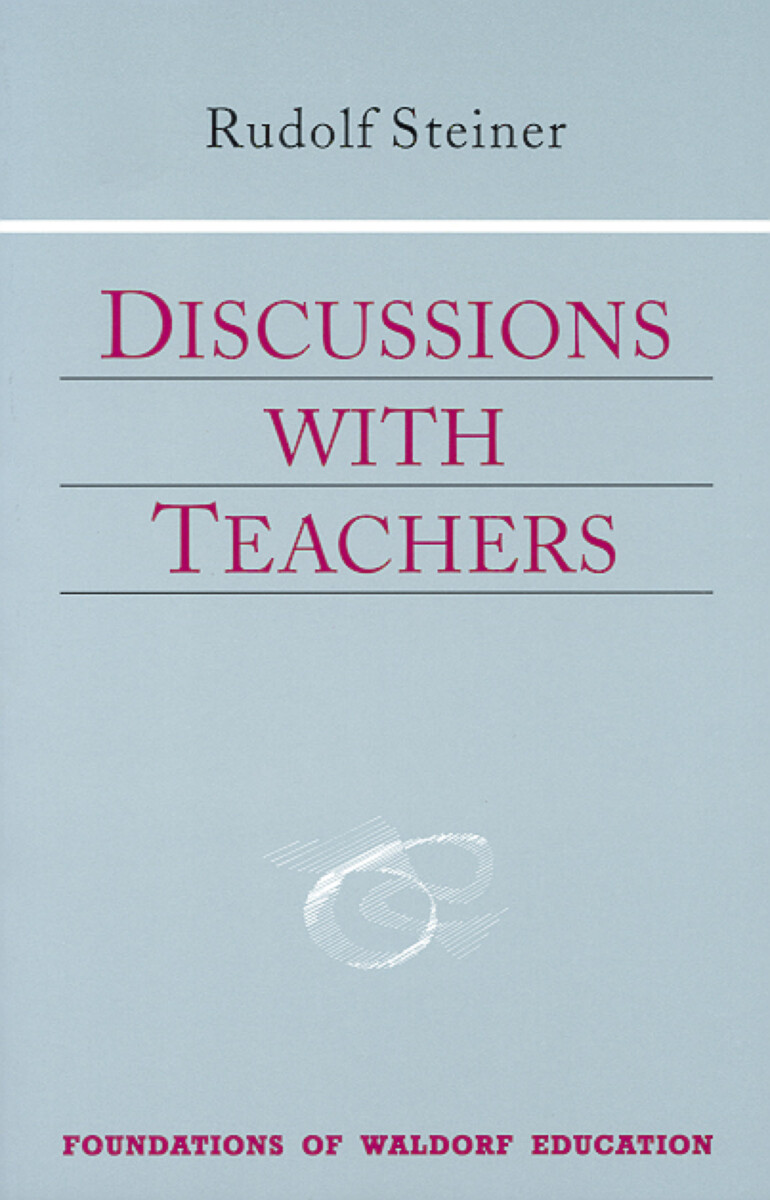 “In spiritual science we divide the human being into ‘I’-being, astral body, etheric body, and physical body. In an ideal human being, the harmony predestined by the cosmic plan would naturally predominate among these four human principles. But in reality, this is not so with any individual. Thus, it can be seen that the human being, when given over to the physical plane, is not yet really complete; education and teaching, however, should serve to make the human being complete. One of the four elements rules in each child, and education and teaching must harmonize these four principles.” — Rudolf Steiner

For two weeks, prior to the opening of the first Waldorf school in Stuttgart, Rudolf Steiner intensively prepared the individuals he had chosen to become the first Waldorf teachers. At 9:00 a.m. each day, he gave the course now translated as Foundations of Human Experience; at 11:00 a.m., Practical Advice to Teachers; and then, after lunch, from 3:00 p.m. to 6:00 p.m., he held the informal "discussions" published in this book.

The tone is spontaneous and relaxed. Steiner does not prescribe specific methods but introduces topics and situations, offering guidelines and allocating practical assignments that are taken up and discussed in the next session. The discussions are filled with insights and suggestions in many different areas of teaching—history, geography, botany, zoology, form drawing, mathematics, and more.

Speech exercises are included. This edition also includes, for the first time in English, three important lectures on the curriculum, given the day just before the school opened.

These fifteen discussions constitute an essential part of the basic training material for Waldorf teachers.

Discussions with Teachers is a translation from German of Erziehungskunst. Seminarbesprechungen und Lehrplanvorträge (vol. 295 in the Bibliographical Survey, published by Rudolf Steiner Verlag, Dornach, Switzerland, 1961).

1. August 21, 1919: The four temperaments, and the nature of the I, astral, etheric, and physical principles as their origin. Some characteristics of each and how to treat them. Polarity in the temperaments. Placement of children in the classroom. The “main” lesson. Sequence of fairy tales, fables, and Bible stories. A question about melancholics. Examinations better omitted.

2. August 22, 1919: The sanguine child. Attention. Temperaments in the Bible and in teaching music. Phlegmatic children and diet. Melancholics and their illusions. Treatment of cholerics. The temperament of different ages. Creative powers depend on preserving youth. Temperaments and occupations.

3. August 24, 1919: Telling stories and drawing for different temperaments. Describing animals. The question of “Cinderellas” in the class.

4. August 25, 1919: Posture and mathematics. The four rules of arithmetic in relation to temperaments. Plane geometry before solid. Designs and stories for different temperaments. Abnormalities of the temperaments. Response to the “Cinderellas.” A case of bad behavior.

5. August 26, 1919: Speech exercises begun. Temperaments and karma. Inﬂuence of father and mother. Change of temperaments through life. Temperaments in languages. Addressing improper behavior and “ringleaders.” The problem of “goody-goodies.”

6. August 27, 1919: Preparing children for poems and stories. Talks about dogs and about violets. How to deal with the “goody-goody” children. Children who have a “crush” on a teacher.

7. August 28, 1919: The fable of the boy, the horse, and the bull. History of Europe from eleventh to seventeenth centuries. The Crusades and their unexpected results. Quarrels between Greeks and Franks. Impact of superior civilizations of the East and of Greek Christianity on Europe. Some historians considered. The “goody-goody” children.

8. August 29, 1919: Fable of the oak and the fox. Children with no apparent talent for speciﬁc subjects. Diet for poor readers and writers. Cocoa. Eurythmy for children who are poor in arithmetic. Geography. Ambition should not be fostered. Children with poor observation skills and those who resent eurythmy. Effects of tea and coffee. Dull and bright children. Remembering forms through caricatures.

9. August 30, 1919: Botany. The nature of growth. Fertilization process not to be stressed for younger children. The plant’s relation to water (root), air (leaves), and warmth (blossom). Plants to be compared to soul, not to the body.

10. September 1, 1919: Human soul qualities revealed in plants. Sleeping, dreaming, and waking in the relation between Earth and plants. Polarity of tree and fungus. The theorem of Pythagoras.

11. September 2, 1919: Phrenology discounted. Plants are not the senses of the Earth. Medical plant lore of medieval mystics. Plants classiﬁed by development of root, stalk, leaf, etc. Plants related to different ages of childhood.

13. September 4, 1919: Algebra to precede the teaching of areas. Introduction of algebra by calculating rates of interest. A shop for the second grade. Rates of movement. Copernicus and Bessel.

15. September 6, 1919: Lemniscate and human organs. Invasions of Roman Empire by Celts, etc., due to desire for gold. Invasion in relation to cultivated and undeveloped land (Goths and Franks). Christianity and pagan cults. Overcoming difference of ability. Foreign and classical languages. Reports and grades. Closing remarks: what the teacher should be.