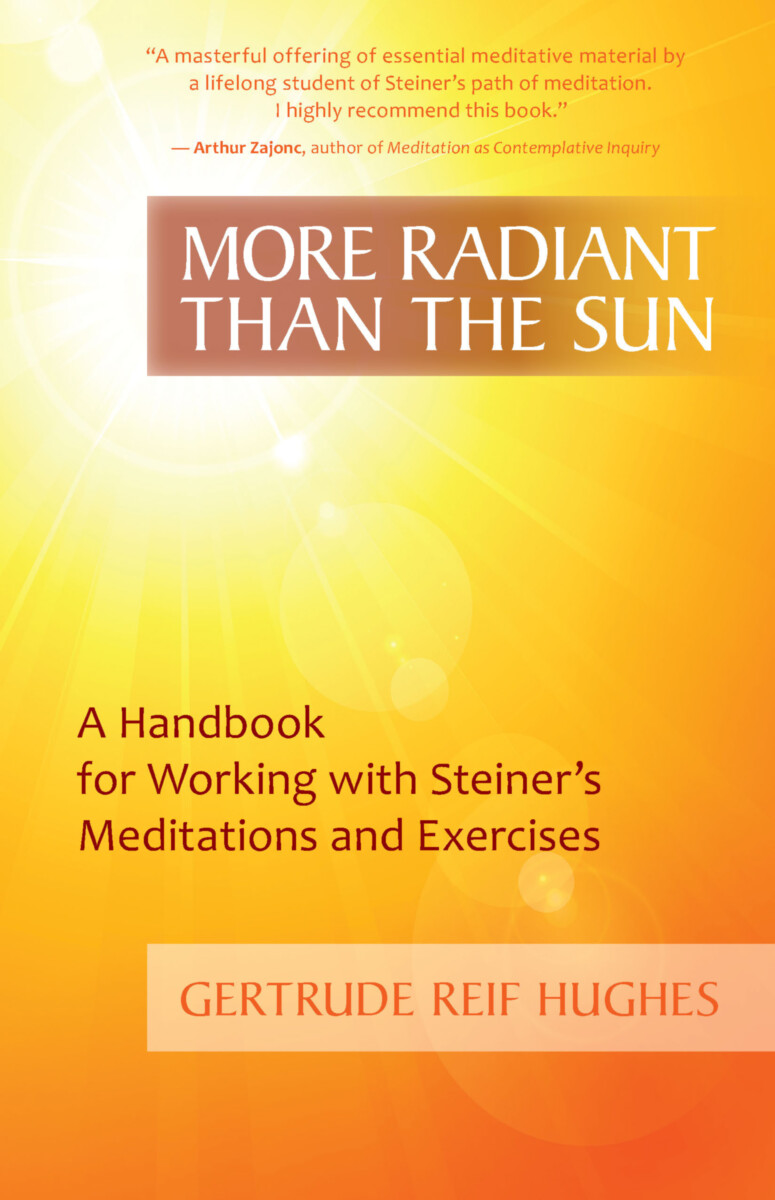 More Radiant than the Sun

A Handbook for Working with Steiner's Meditations and Exercises

Rudolf Steiner (1861–1924) spoke many times about the need for more than an intellectual understanding of what he taught as the spiritual path of Anthroposophy, or Spiritual Science, and to this end provided numerous meditations and exercises for his esoteric students during the first three decades of the twentieth century. He always emphasized the need for self-development through the regular practice of meditations and exercises to strengthen and clarify one’s thinking, feeling, and will. Steiner saw such efforts as means not only to develop spiritual sight, but also to protect oneself inwardly from the various dangers inherent to inner development, including egoism and mistaking fantasy for spiritual realities.

This handbook offers verses, exercises, and original instructions from Steiner, along with commentary, suggestions, and context from Gertrude Reif Hughes, a student of Anthroposophy for much of her life. Having meditated Steiner’s verses and their meanings for decades, she describes how the content of these inspiring meditations can create far-reaching effects for one’s life on Earth as well as for one’s eventual life in the spiritual world.

More Radiant than the Sun will be a valuable companion for anyone who is serious about deepening the practice of Anthroposophy.

“In this invaluable handbook, Gertrude Reif Hughes, in addition to providing us a comprehensive introduction, has given what has been so long needed in connection with Rudolf Steiner’s verses and exercises—the benefit of a deep and evolving personal experience in working with them.”

Three Meditations on Self

Perceiving Growth and Decay
The Visible and Invisible
Plant Meditation

Three Meditations on the Cosmos

Trust in Thinking
Rainbow Colors Exercise
From Static to Dynamic

Afterword: Fostering Transformation from the Future
Cited and Relevant Works

Gertrude Reif Hughes, PhD, was Professor Emerita of English and Women's Studies at Wesleyan University, where she served as Chair of her Department and the Women's Studies Program. The author of Emerson's Demanding Optimism (1984), she published essays on American poets, including Emily Dickinson, Gwendolyn Brooks, H.D., and Adrienne Rich, as well as essays on Rudolf Steiner and feminist thought and on Steiner's Calendar of the Soul. A lifelong student of Anthroposophy, she is a former chair of the Board of Anthroposophic Press and former President of the Rudolf Steiner (summer) Institute, where she taught meditation for many years and served on its board. She was also a member of the board of Sunbridge College and a core faculty member of The Barfield School Masters Program at Sunbridge. As a child, she attended the New York City Rudolf Steiner School and later earned degrees from Yale University and Mount Holyoke College. Gertrude passed away January 5, 2022.

From the History and Contents of the First Section of the Esoteric School
Letters, Documents, and Lectures: 1904–1914 (CW 264)

The Gentle Will
Guidelines for Creative Consciousness