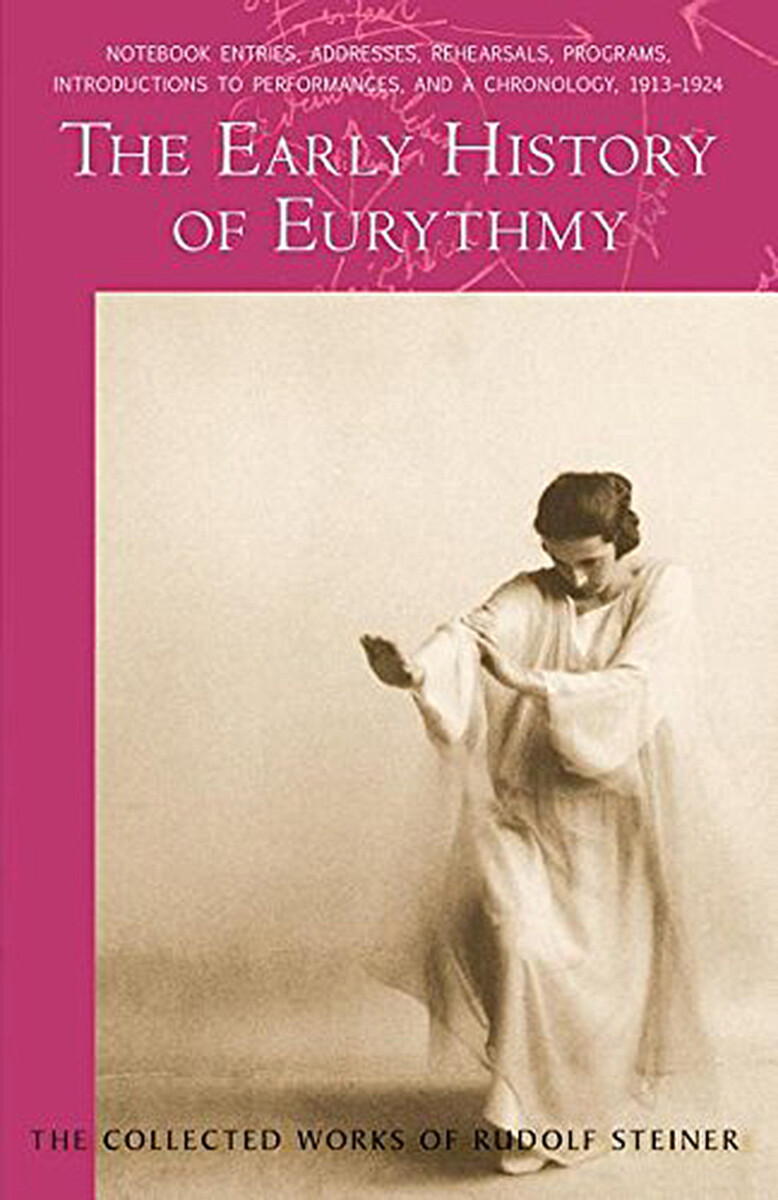 The Early History of Eurythmy

The arts either:
Arise from observation — bypassing the concept
or out of experience — without arriving at a concept. —
Eurythmy turns the inner experience of the human being into external movement.

Artists have sought impressionism; but nature cannot be grasped in this way, for the senses already forbid mere impressions. One cannot hold fast to the expressions, because the means of representation do not reveal the expressions.

Eurythmy:
It is an art form that makes use of the human being as an instrument, of our human capacities for movement as means of expression. Language takes up thoughts. But it brings them into the will.
Only what flows from the will is artistic.

The Early History of Eurythmy is the first of three volumes of Rudolf Steiner’s “eurythmy addresses,” short introductory talks preceding the earliest performances of this new art of movement. Of the nearly 300 transcripts that survive, few have thus far been translated into English.

This volume presents, chronologically, the addresses related mostly to drama, generally, and specifically to stage performances of Goethe’s Faust and Steiner’s mystery dramas. In addition, it features all of Rudolf Steiner’s notebook entries on eurythmy, along with all of the extant eurythmy programs from 1913 to 1925, which yield invaluable insights into Steiner’s taste and aesthetics.

Frederick Amrine’s engaging introduction emphasizes that eurythmy is an important episode in the history of dance, but has been unjustly neglected. He contends that eurythmy is a continuation of an aesthetic revolution that began not in Europe but in America; that the original impulses leading to “new dance” were deeply spiritual; and that there are deep but largely unrecognized affinities between “new dance” and eurythmy.

This counter-narrative about the prehistory of eurythmy within the history of dance should be of particular interest to English-speaking anthroposophists, because it identifies the pioneering work of three American women as the all-important context for the development of eurythmy: Loie Fuller, Isadora Duncan, and Ruth St. Denis. Drawing on extensive historical documentation, he states that it is eurythmy rather than modern dance that is the rightful heir of Fuller, Duncan, and St. Denis.

The Early History of Eurythmy is a translation from German of part 3 from Eurythmie. Die Offenbarung der sprechenden Seele (GA 277).

Introduction: Eurythmy and the “New Dance,” by Frederick Amrine

1. Notebook Entries and an Excerpt from a Letter
2. Addresses and Other Texts Related to Eurythmy
3. Two Rehearsed Readings of “Classical Walpurgis Night” from Goethe’s Faust II
4. Eurythmy Programs, Advertisements, and Announcements
5. Chronology and Overview

READ RUDOLF STEINER’S INTRODUCTION TO A EURYTHMY PERFORMANCE:
“The Inauguration of a Truly New Direction in Art,” Dornach, January 11, 1920

Eurythmy
A Short Introduction to the Art of Movement

Everyday Eurythmy
Exercises to Calm, Strengthen, and Centre: A Workbook for Daily Practice

The Zodiac Gestures in Eurythmy
OR