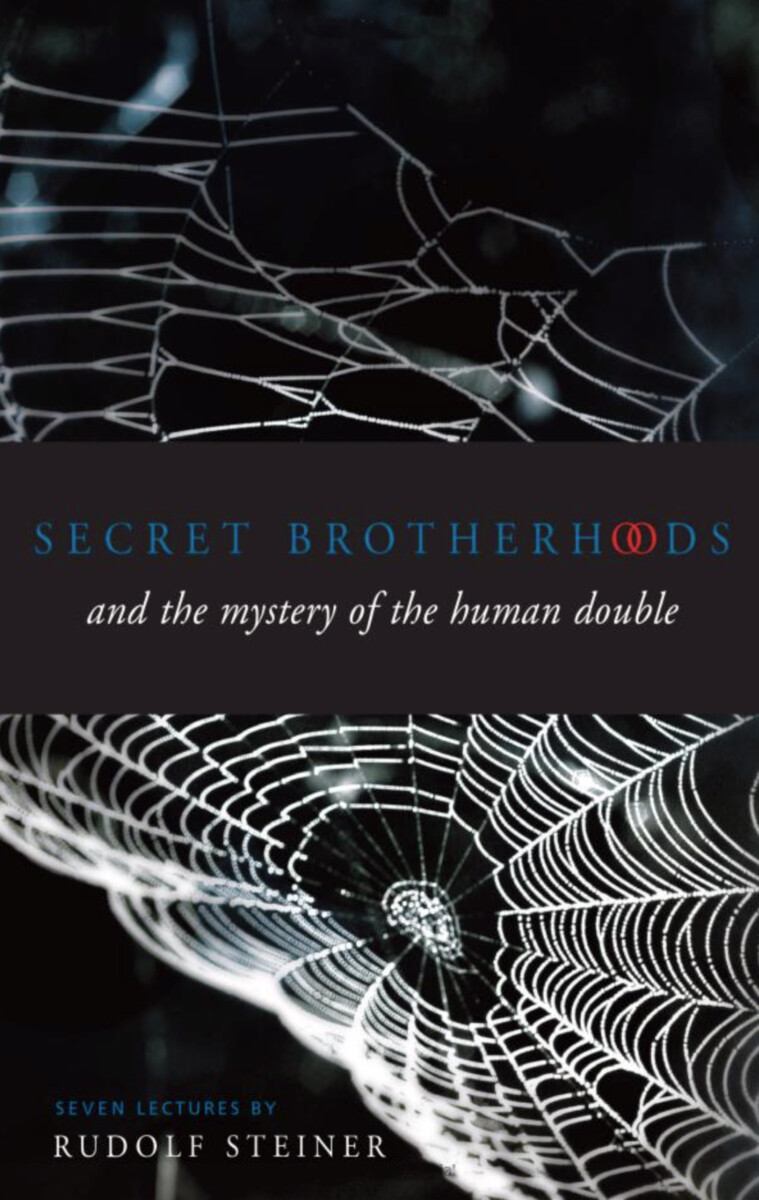 Secret Brotherhoods and the Mystery of the Human Double

In the age of the internet and the proliferation of “conspiracy theories,” ideas that secret groups are trying to gain control of humanity are no longer rare. But this was not true in 1917 when Rudolf Steiner spoke of such matters in the extraordinary lectures contained in this book. His unique contribution to this controversial topic is not based on abstract theories; it arose from exact research methods that use advanced forms of perception and cognition.

Using the firsthand knowledge available to him, Steiner takes us behind the scenes of events in outer history and contemporary culture to reveal a dark world of secret elitist brotherhoods that are attempting to control the masses through the forces of economics, technology, and political assassinations. These hidden groups, he explains, seek power through the use of ritual magic and suggestion.

Never before available in English as a complete volume, the text of this book has been freshly translated for this edition.

This is a very timely book to read and digest. Rudolf Steiner was speaking about secret brotherhoods way back in 1917. For students of the occult and esoteric sciences the year 1917 is mentioned as a crucial year for the modern world from not only he, but also, Madame Blavatsky, G.I.Gurdijieff and Alester Crowley mentioned it in their teachings. The modern day players include Bill Cooper who was assassinated by American Federal government sources in 1995, David Icke who wrote The Biggest Secret, and even Malachi Martin, former Jesuit and author of The Keys of this Blood. These courageous souls have all spoken out on the subject of secret elites and the winner-takes-all race in the bid for ultimate earthly control—but Steiner said it first.

There is the ushering in of a New World Order and the creation of a one-world government. Steiner says, there are elitist forces at work that are seeking to control the masses through the forces of economics, technology and political assassinations. The goals of secret brotherhoods in the West that work through these forces and other such Brotherhoods in the East are working to ensure the bone and marrow of the new value system are constructed not of God’s world and God’s qualities, but exclusively of human worth and human qualities. Another name for them are the materialists.

Consider this: We, citizens of the West, see this escalation to dominate and control power utilities and strategic key regions in the world coming out of America now. Those of us under forty will surely live under its legislative, executive and judiciary authority and control. Steiner directly saw the role of the American continent and the secret brotherhoods, sometimes called the Illuminati, drive in already determining certain contours and aspects of our global life. Steiner has no doubt these secret brotherhoods are anti-Christ and says so plainly and without ado. Interestingly enough, the late Pope John Paul II spoke of the Western Globalists as “true and powerful contenders in the millennium endgame.” He also was adamant that no system would ensure and guarantee the rights and freedoms of the individual system if it is not proposed by Christ’s Church.

How do these secret elites gain control? One of two ways, Steiner notes. Unfashionable though it may sound, the first is by ritual magic. The spiritual researcher must confront the many serious problems which humanity has been struggling with. One of these major problems is the nature of evil and how evil manifests itself on the material plane. If our lives are to have purpose Steiner challenges us to take up the call. We are not contenders in the New World Order. We are the stakes. Steiner said the only defence against these things is knowing about them. If you know them, you are protected.... But you must not be idle about acquiring real knowledge of these things.

The second way these globalist elites are gaining control is by working through organisations and individuals who suit their agenda. These organisations and individuals operate from two principle bases of power. The first is the power base of finance, industry and technology. The Global economy seeks to foster an ever-increasing cooperation of wider interrelationships between governments of the world. This accomplishes the breakdown of old familiar traditional barriers now in place between nations.

Secret Brotherhoods and the Mystery of the Human Double is a fascinating read. The truth is most people will not believe what’s happening today on the political horizon. The forces that are at work behind the scenes are as old as the battle between good and evil themselves. Protea readers will engage themselves because Steiner’s way is not coming from out of only the materialist plane. This book looks down the time line, views work being accomplished in different eras under difficult circumstances and speaks easily on the topic of behind the scenes of external events. The problem with covert control and secret brotherhoods is you cannot rebel against something you don’t know exists. Steiner students have no such excuse.

Many other topics are tackled also. Here is a truncated run-down of subject matter.

Lecture 1. The characterisation of science and spiritual science: scientific observation traces phenomena back to their origin and studies what is visible; the starting point for spiritual science is death and what happens thereafter in the spiritual world. Resignation and courage to seek more knowledge when the outer limits are reached.

Lecture 2. The time has come to reveal spiritual secrets. Increasing emphasis on materialism since the 16th century necessitates the search for spiritual knowledge today. How the spiritual world impinges on the physical. The faculty of love.

Lecture 3. Human souls are now becoming conscious of much that formerly lay beyond consciousness. Some are concerned more with the spiritual world while others seek earthly power. The guidance of humanity in accordance with esoteric laws. Knowledge gained from souls who die of assassination.

Lecture 4. The transformation of soul life during the course of time. Monothesism leads human beings only to their own angel. The battle in the spiritual world between 1841 and 1879. The spirits of darkness at work. The task of spiritual science.

Lecture 5. The spirit cannot be comprehended by means of the concept of the unconscious. Where there is a spirit there is consciousness. Secret brotherhoods seek to use occult knowledge for their own ends. The zenith of materialism and experiencing the appearance of Christ in the etheric. To tackle evil consciously is a contemporary task. How spiritual and materialistic concepts work in the life after death, and how secret brotherhoods use this knowledge. Eliminating the “American” impulse.

Lecture 6. The secret brotherhoods and spiritualism. Contradictions in life. A unifying universal principle and how certain spiritual individualities work. Living reality and abstract lack of contradiction.

Lecture 7. The old culture is gone and spiritual science points to the future. God, Virtue, Immortality. How secret brotherhoods refine them. How eastern and western brotherhoods use spiritual knowledge. Depending on how human being behave on earth, the dead can work out of the spiritual world in freedom and be coerced into human existence in an artificial way.

Steiner accepts the fact that people will shy away from making an effort to ascend to concepts that are difficult here in this book because they have no outer object to relate to anything other than the visible world. But the horizontal politics of the visible world are unmistakable for those “with eyes that see and ears that hear.” The spiritual ideas and concepts inherent in this book throw a light in dark places and provide the ways and means for those treading the spiritual path.

A necessity book for the days and years ahead of us.

In light of all that Steiner brings forth, we are obligated to reassess our own views on the modern day assassinations of JFK, Karen Silkwood, Juanita Nielson, Bobby Kennedy, Martin Luthur King, and Princess Diana, etc. Those that were able to affect large outcomes for ‘good’ on the material plane were indeed pursued by forces that viewed them as an impediment to accomplishing their own agenda.

Secret Brotherhoods...has been freshly translated for this edition.