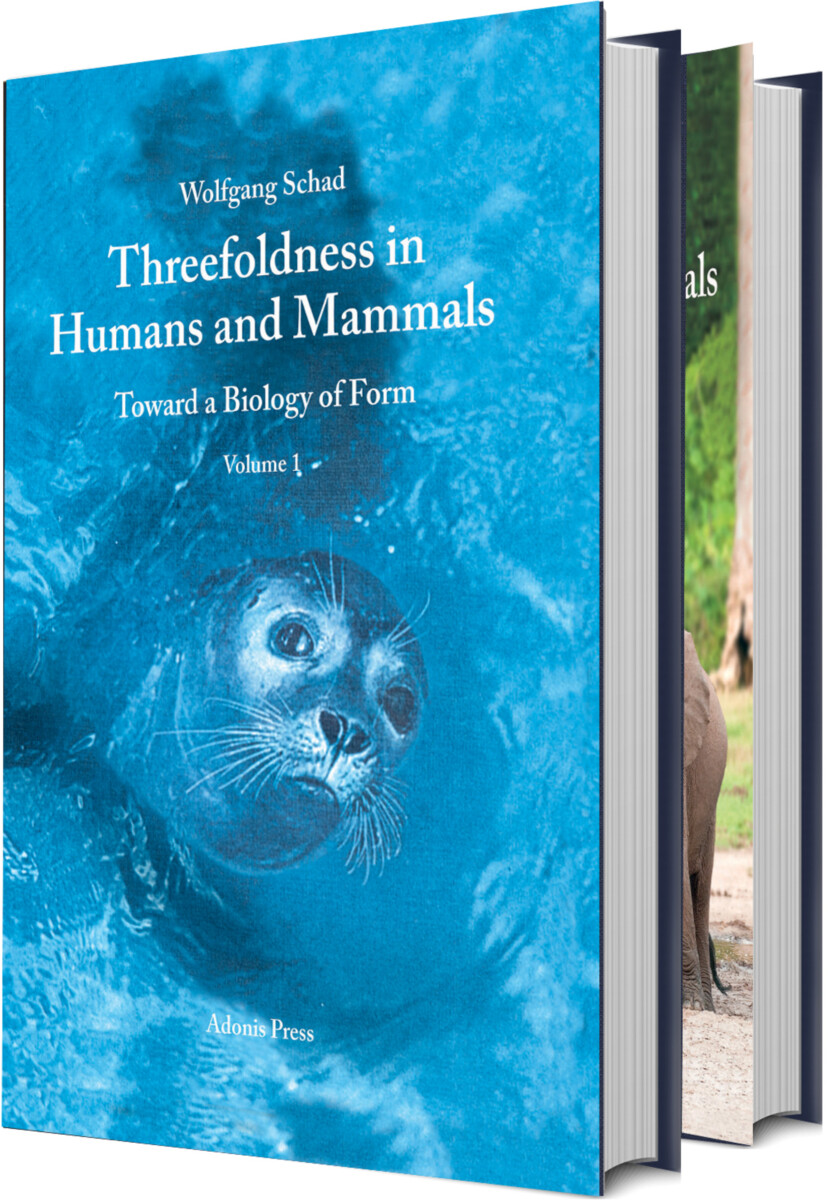 Threefoldness in Humans and Mammals

Toward a Biology of Form

The result of over 50 years of research, Threefoldness in Humans and Mammals is the beautiful, authorized edition of Wolfgang Schad’s life’s work. In chapter after chapter of this monumental two-volume work, Schad demonstrates in detail how the dynamic concept of the threefold organism—first described by Rudolf Steiner a century ago—sheds new light on aspects of mammals, including size, form, coloration, physiology, embryonic development, behavior, and habitat. Indeed, he shows how the threefoldness of the organism—comprised of the polarity of nerve-sense and metabolic-limb systems and the mediating circulatory-respiratory system—is a key to understanding the extraordinary diversity of our closest animal relatives.

Reading this book, we experience a growing sense of satisfaction—even wonder—realizing that each species, through its unique constitution, actually explains itself, that right down to specific features such as dentition and coloration, it is a unique embodiment of the threefold organization. In addition, we begin to experience the threefold organism itself—not as an abstract, rigid thought construct that allows us to determine a mammal's taxonomy, but as a creative lawfulness that comes to one-sided expression in each species.

Thus, Wolfgang Schad follows in the footsteps of Goethe, who said of his scientific pursuits: “The ultimate goal would be to grasp that everything in the realm of fact is already theory.... Let’s not look for something behind the phenomena—they themselves are the theory.”

In the first volume, a masterful, comprehensive description of the threefold human organism lays the foundation for an in-depth consideration of the most familiar groups of mammals, including stunning chapters on antelopes and deer with their horns and antlers, as well as a concluding chapter on mammals’ intimate relationship with their natural environment.

The second volume begins with chapters on the more primitive mammals and continues with studies of mammalian embryology, milk, emotional life, and relationship to death. The author then returns to the theme of human threefoldness in the final chapter. The balanced threefoldness of the human organism contrasts with its extraordinarily diverse, though one-sided, expressions in the mammals, which in turn emphasize aspects of our own humanity. A growing awareness of this intimate reciprocal relationship leads to a deepening empathy for our animal brothers and sisters.

The reader will do well to begin with the first chapters in volume 1, which introduce the main recurring motifs and build throughout the book. Although the content includes a great deal of specialized knowledge, it is presented in language accessible to the general reader. The text is richly illustrated with well-chosen photographs and drawings. Numerous diagrams illumine the dynamic interrelationships within various groups of mammals.

This two-volume set is protected in a handsome slip case. In both form and content, this is a classic edition of a groundbreaking work that should find its place in every home, school, biology department, and library.

1. Motive, Method, and Theme
2. The Threefold Human Organism
3. Threefoldness in the Higher Mammals
4. The Carnivores
5. Cetaceans: Whales, Dolphins, and Porpoises
6. The Rodents
7. The Ungulates: An Overview
8. The Horned Mammals: Cattle, Goats, and Sheep
9. The Horned Mammals: Antelopes
10. The Antlered Mammals: Deer
11. The Giraffes
12. The Environment as Organism

13. The Primitive Mammals
14. The Insectivores and Primates
15. The Bats
16. The Xenarthrans and Pangolins
17. The Lagomorphs, and the Elephants and their Relatives
18. Introduction to Mammalian Embryology
19. Mammalian Embryonic Membranes and Placentation (Heinrich Brettschneider)
20. Milk
21. Death in Mammals
22. The Emotional Life of Mammals
23. Human Threefoldness

Universal Spirituality and Human Physicality
Bridging the Divide: The Search for the New Isis and the Divine Sophia (CW 202)
OR