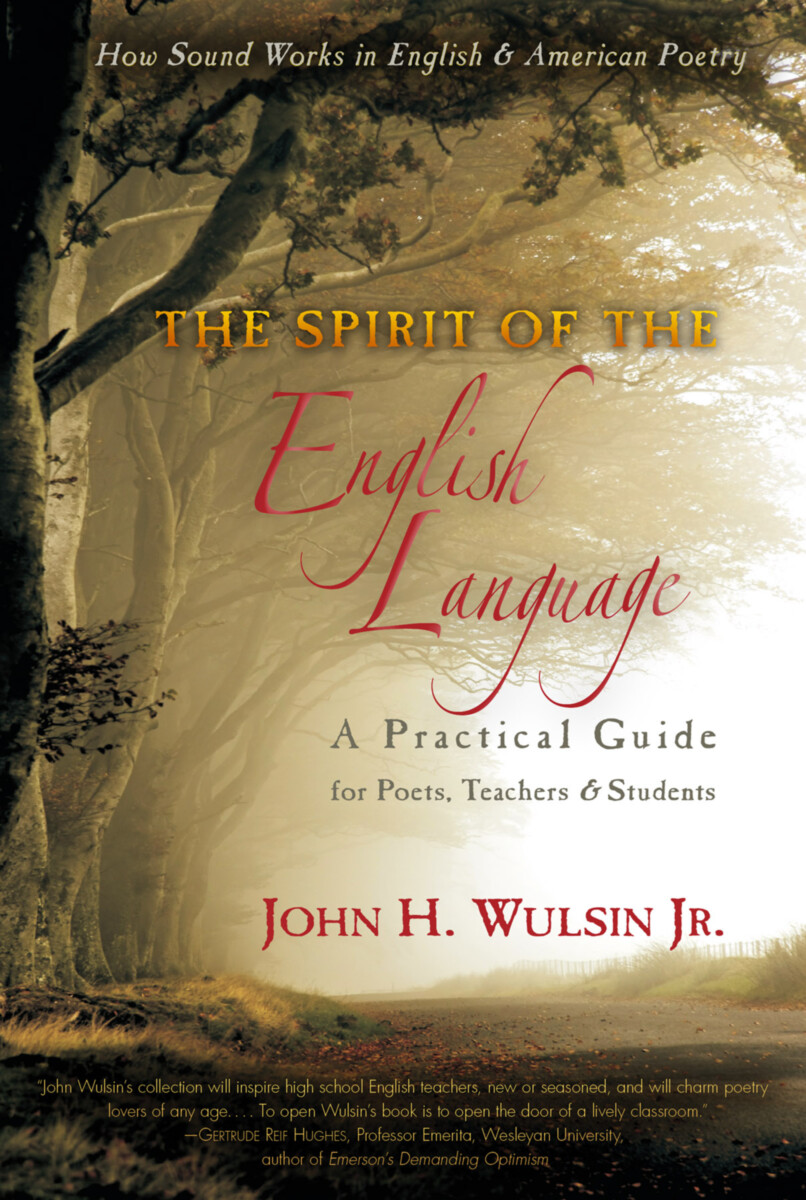 The Spirit of the English Language

John Wulsin approaches the English language not as a conventional linguist, but as a poet interested in the spirit and evolution of our language. To show “how sound works in English and American poetry,” the author traces the many changes, both subtle and radical, in how English has sounded over the past thirteen centuries, while also showing how those changes are related to the evolution of human consciousness in Western, English-speaking peoples.

The Spirit of the English Language is never dry but filled with the textures of the lives and works of the great English-language poets. Wulsin describes the evolving activity of poetry in the biography of each poet, beginning with the Old Anglo–Saxon in Beowulf and the later works of Chaucer, and following the spirit of the English language through to the nineteenth century’s “primal/modern” language of Gerard Manley Hopkins and Dickinson’s diamond-distilled language. Along the way, we discover how the very sounds of English have changed the ways in which not only poets think and express themselves, but, more important, how sound works and changes our human consciousness. The author also discusses specifically how, in teaching poetics, stages of the developing English language quicken corresponding stages of thinking in maturing adolescents.

Twelve years in the making, The Spirit of the English Language is the fruit of John Wulsin’s thirty years of teaching language and literature to adolescents. The book is further informed and fructified by the author’s fifteen years of teaching poetics to adults, as well as decades of writing poetry and participating in numerous poetry workshops.

This practical guide will become a classic for all poets, teachers of poetry and language, and students. It is a truly valuable resource for anyone interested in English, its development, its effects on consciousness, and how sound works in poetry.

“John Wulsin’s collection will inspire high school English teachers, new or seasoned, and will charm poetry lovers of any age. Starting with his subtle, engaging introduction to the sounds of poetry, readers will find abundant riches here. Biographical sketches show how poets help to create the culture and consciousness of their particular historical times. A mix of approaches to the poems themselves shows how the ‘spirit of language’ dwells in the ‘lyrical activity’ of various groups of poets—the Rosicrucian and Neo-Platonic ‘metaphysical’ poets, the British Romantics with their supernatural capacities for perceiving nature, and finally the American Romantics with their insistence on newness and singularity. To open Wulsin’s book is to open the door of a lively classroom.”

Gertrude Reif Hughes, Professor Emerita, Wesleyan University, author of More Radiant than the Sun: A Handbook for Working with Steiner's Meditations and Exercises

John H. Wulsin Jr. grew up in Cincinnati, Japan, and Switzerland. He worked as an instructor with Outward Bound on Hurricane Island, Maine, and in the Austrian Alps before discovering Waldorf education. After completing his Waldorf training at Emerson College in England, he completed his B.A. in English at Harvard College before teaching in two non-Waldorf independent high schools. For twenty-seven years, John has been teaching English and Drama at Green Meadow Waldorf School in Chestnut Ridge, New York, from which his children have graduated. With an M.A. in English and American Literature from Columbia University, he has also devoted many years to teaching Poetics to adults at the Eurythmy School of Spring Valley, New York, at the Threefold Educational Foundation. He also teaches high school pedagogy at Sunbridge College, New York, and frequently teaches at the Waldorf High School Training at Rudolf Steiner College in Fair Oaks, California. John works on the editorial board of Renewal: A Journal for Waldorf Education and has published articles in Independent School, Towards, and Renewal. His books include Laws of the Living Language and Proverbs of Purgatory and as editor, The Riddle of America, all published by the Association of Waldorf School of North America (AWSNA). He is also coeditor of Books for the Journey, from Michaelmas Press.

The Genius of Language
Observations for Teachers (CW 299)

One Language
Source of All Tongues

The Shipwreck Sea
Love Poems and Essays in a Classical Mode

The Source of Speech
Word, Language, and the Origin of Speech: From Indology to Anthroposophy
OR